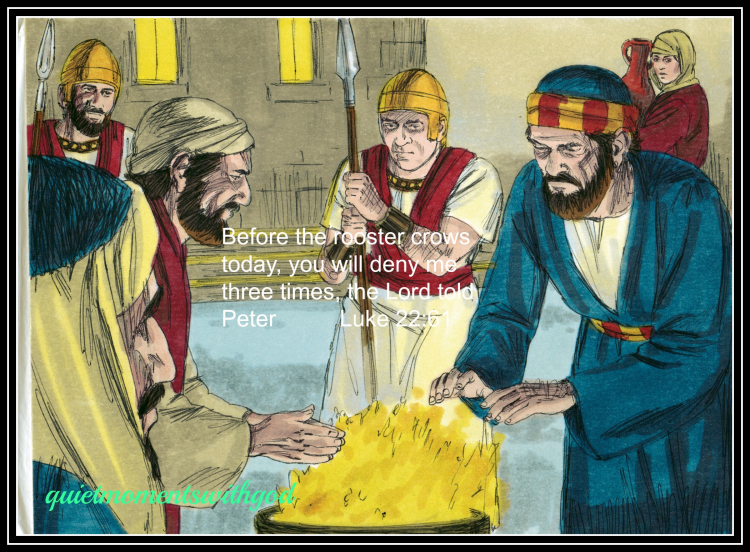 After arresting Jesus they led him away to the house of the high priest. And when some there had kindled a fire in the middle of the courtyard and had sat down together, Peter sat down with them. A servant girl saw him seated there in the fire-light. She looked closely at him and said, “This man was with him.” But he denied it. “Woman I don’t know him, he said.” A little later someone else saw him and said, “You also are one of them.” “Moan I am not!” Peter replied. About an hour later another asserted, “Certainly this fellow was with him, for he is a Galilean.” Peter replied, “Man, I don’t know what you’re talking about!” Just as he was speaking, the rooster crowed. The Lord turned and looked straight at Peter. Then Peter remember the word the Lord had spoken to him. “Before the rooster crows today, you will disown me three times.” And he went outside and wept bitterly.

Peter is a lot like me and he is a lot like you. How many times do we as Christians have the opportunity to share our own faith and we choose not to. Even when someone ask you, hey I saw you going to church last week, you make some kind of an excuse of why you were there. Every time that we choose not to speak up as a Christian or even show love to another human being, aren’t we choosing to deny Jesus. Many times people will say I don’t know what to say, believe me when I tell you when the opportunity comes your way and it will, the Spirit will give you all what you need to say to someone else, all we need to be is just believe and have the faith. Have you ever invited your neighbor, friend or a co-worker to church with you, if your answer is no, my question to you is what are you waiting for. We all are able to plant in the heart of another seeds of God’s love don’t worry the rest is in God’s hands, maybe they will believe what you are saying or maybe they won’t but don’t give up. Continue to be in prayer for another and watch God at work overtime, His will be done.

Grace and Peace to you my friends