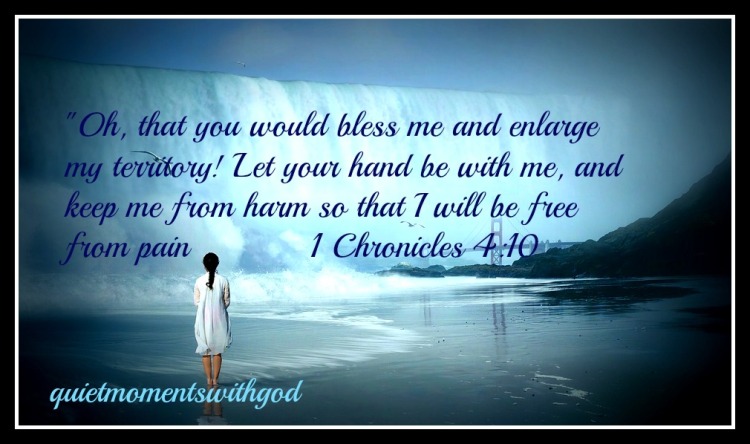 Then Jabez is mentioned in 1 Chronicles 4:9-10: “Jabez was more honorable than his brothers. His mother had named him Jabez, saying, ‘I gave birth to him in pain.’ Jabez cried out to the God of Israel, ‘Oh, that you would bless me and enlarge my territory! Let your hand be with me, and keep me from harm so that I will be free from pain.’ And God granted his request.”

The name Jabez means “he causes pain,” so we can assume that something about his birth was exceptionally more painful than the usual birth – either physically or emotionally. In Bible times, a name was very important. A name often defined a person’s future – what they would become. So perhaps Jabez’s mother was predicting her baby’s future.
It seems as if Jabez defied his hopeless name and dysfunctional beginning to become a man who believed fervently in the power of God. He prayed with urgency and vulnerability. He cried out to the Lord with boldness!

In my last post I wrote on how important our prayer life should be as we journey with the Risen Lord, Jesus Christ. Bruce Wilkinson wrote the Prayer of Jabez and well as Beyond Jabez. In these books Bruce speaks on how powerful prayer is, in which prayer changes small dramatic ways, it tells us of God’s presence is alive even today besides in Biblical times. Zabez has said this prayer to God and as well as he said long ago, I myself have ask God to enlarge my own territory to share the Gospel of Jesus Christ as much as I could. By doing this it will lead me and you into the Land of the Unknown, where you may feel overwhelmed and perhaps even incapable of handling opportunities. And if you do feel this way hopefully you as well as myself will pray the prayer of Jabez, for the hand of the Lord to intervene on our behalf. Also when the reality of life leaves you vulnerable to temptation that, if acted on, would hurt the Lord and others and stop the miracles you’ve been experiencing-Bruce’s hope for us is that we will know to ask the Lord to keep evil from us so that we would no cause pain.

You’ll discover that the values you used to hold are not as important anymore, and you’ll begin wanting what God wants. As you give up the life you thought you needed, you’ll find yourself getting more of God Himself. And he will so satisfy your heart that all other passions will be consumed in your longing for Him. This is the journey that I am on today, the more I go deeper in my journey, scriptures and prayer in knowing God the more I want out of it, to me it is like a vacuum, you feel as thro you are being suck right into the middle of it, and you are not alone you are standing right with God. Until all that is left and all that truly matters is Jesus Christ himself. One day you’ll awaken to the fact that you’ve chosen Him as your supreme purpose in life, and you’ll realize that He Himself has been your greatest dream, your longing, your desperate desire all along. Hand over your life and you’ll receive abundant life, which you can enjoy here and now and throughout all eternity. When you are able read the Prayer of Jabez book as well as Beyond Jabez by Bruce Wilkinson and believe me you’ll come to understand the power of prayer.