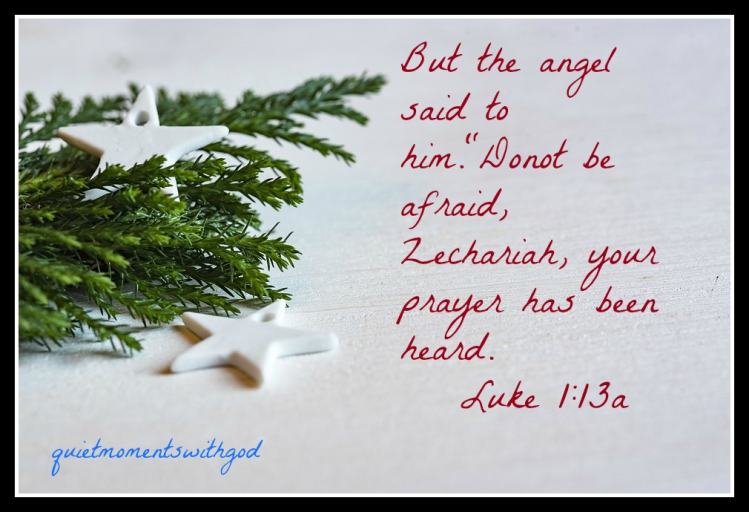 In the time of Herod king of Judea there was a priest named Zechariah, who belonged to the priestly division of Abijah; his wife Elizabeth was also a descendant of Aaron. Both of them were righteous in the sight of God, observing all the Lord’s commands and decrees blamelessly. Elizabeth was not able to conceive, and they were both very old. Once when Zechariah’s  division was on duty and he was serving as priest before God, he was chosen by lot, according to the custom of the priesthood, to go into the temple of the Lord and burn incense. And when the time for the burning of incense came, all the assembled worshippers were praying outside. Then an angel of the Lord appeared to him, standing at the right side of the altar of incense. When Zechariah saw him, he was startled and was gripped with fear. But the angel said to him, “Do not ne afraid, Zechariah; your prayer has been heard. Your wife Elizabeth will bear you a son, and you are to call him John. He will be a joy and delight to you, and many will rejoice because of his birth, for he will be great in the sight of the Lord. He is never to take wine or other fermented drink, and he will be filled with the Holy Spirit even before he is born. He will bring back many of the people of Israel to the Lord their God. And he will go before the Lord, in the spirit and power of Elijah, to turn the hearts of their parents to their children and the disobedient to the wisdom of the righteous to make ready a people prepared for the Lord. Zechariah asked the angel, How can I be sure of this? I am an old man and my wife is well along in years. The angel said to him, “I am Gabriel. I stand in the presence of God, and I have been sent to speak to you and to tell you this good news. And now you will be silent and not be able to speak until the day this happens, because you did not believe my words, which will come true at their appointed time.               Luke 1:5-20

In Biblical times it was a disappointed for a woman not to have her own children and for others to look down upon Elizabeth because she was barred. However, little did they know of or anyone else know the plan that was in place by God. The child that was to be born to Elizabeth and Zechariah called John was to be the one chosen to prepared God’s people for the coming of the Lord Jesus Christ. Even through they had no children they never doubt that somehow or someway that God would bless them, and that God was the one true God, “The Great I Am” that was told by Moses, and by other prophets. Can you even try to imagine the joy that was in Elizabeth’s heart when she came to realize that she was with child even pass the child bearing years. Jesus’ own words to his disciples later in his life would be, “With man this is impossible, but not with God, all things are possible with God.” (Mark 10:27)  Because regardless of your situation in your life right now at this very moment, all things are possible with God.