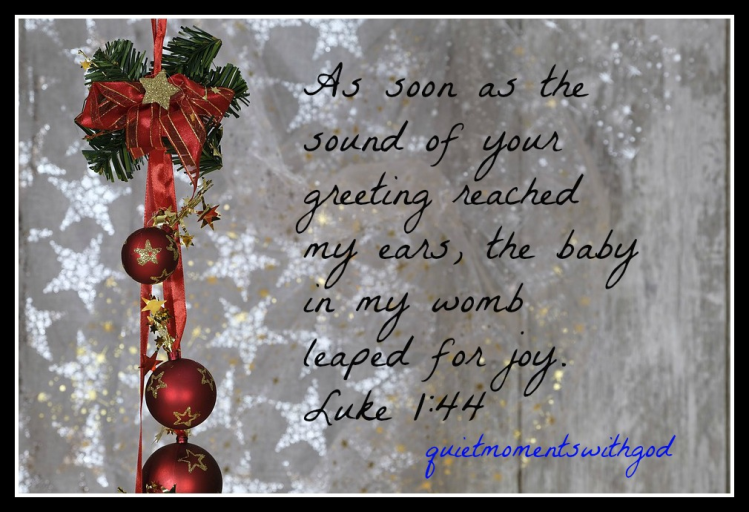 At that time Mary got ready and hurried to a town in the hill country of Judea, where she entered Zechariah’s home and greeted Elizabeth. When Elizabeth heard Mary’s greeting. the baby leaped in her womb, and Elizabeth was filled with the Holy Spirit. In a loud voice she exclaimed: “Blessed are you among women, and blessed is the child you will bear! But why am I so favored, that the mother of my Lord should come to me? As soon as the sound of your greeting reached my ears, the baby in my womb leaped for hoy. Blessed is she who has believed that the Lord would fulfill his promises to her!”

And Mary said: My soul glorifies the Lord and my spirit rejoices in God my Savior, for he has been mindful of the humble state of his servant. From now on all generations will call me blessed, for the Mighty One has done great things for me, holy is his name. His mercy extends to those who fear him, from generation to generation. He has performed mighty deeds with his arm; he has scattered those who are proud in their inmost thoughts. He has brought down rulers from their thrones but has lifted up the humble. He has filled the hungry with good things but has sent the rich away empty. He has helped his servant Israel, remembering to be merciful to Abraham and his descendants forever, just as he promised our ancestors.” Mary stayed with Elizabeth for about three months and then returned home.                                     Luke 1:39:56

When one thinks of the women of the ancient world, our first emotional response is usually pity. This would even be true in the Jewish world of those days when our Lord added humanity to His deity and manifested Himself to men. There was so much that women could not do, or at least were not allowed to do. We might suspect that the limitations of biblical revelation, compounded by those of the culture, would have made womanhood a curse. The men assumed the leadership roles, especially in spiritual matters. The women seemed only fit for fixing meals and bearing children. Perhaps a few women, “blessed” by financial prosperity and social standing, may have been able to enjoy some of the benefits of the male world. Luke is well-known for his high regard for women and for the prominence which he gives them in his two accounts. We find the first instance of his highlighting of women in our text in the first chapter of Luke’s gospel, where the spotlight is directed toward two godly women. The two women are Elizabeth, the soon-to-be mother of John the Baptist, and Mary, the mother-to-be of Messiah, were truly great and godly women. Both were humble women of no social or economic standing. Elizabeth was the wife of an obscure priest. Both she and Zacharias were country people, who lived in an unnamed village in the hill country of Judah. The bore the added social stigma of having no children. No doubt in the minds of some they were being punished by God for some sin. Mary, too, was a humble peasant girl. She did not have any social standing due to her parentage or class, nor even the dignity of Elizabeth and Zacharias age. Yet the worship of both of these women is such that they are models for all true disciples of our Lord. By reading these words in the Gospel of Luke I believe that as long as anyone including a woman has a willing heart God will use them to glorified his kingdom.

Grace and Peace to You My Friend