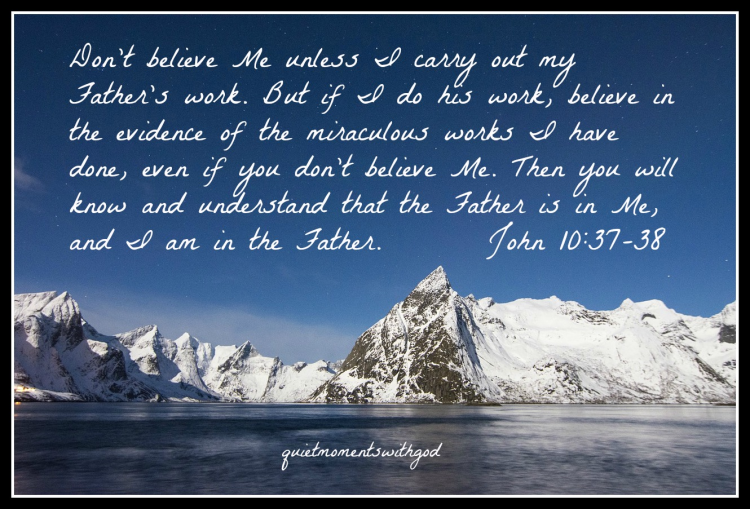 Again his Jewish opponents picked up stones to stone him, but Jesus said to them, “I have shown you many good works from the Father. For which  of these do you stone me?” We are not stoning you for any good work, ” they replied but for blasphemy, because you, a mere man, claim to be God. Jesus answered them, “is it not written in your law, ” I have said you are gods” If he called them gods, to whom the word of God came and Scripture cannot be set aside–what about the one whom the Father set apart as his very own and sent into the world? Why, then do you accuse me of blasphemy, because I said, “I am God’s Son?” Do not believe me unless I do the works of my Father. But if I do them, even through you do not believe me, believe the works, that you may know and understand that the Father is in me, and I in the Father.                 John 10:31-38

For most people, it’s what others do not say, that counts. When Jesus spoke He spoke with authority, but when the people asked Him who He was, He pointed them to the things He did. he asked them to take not of His deeds. These deeds were acts of compassion, healing and miracles. Jesus was far more than simply a traveling Teacher who spoke about God and His kingdom. Jesus didn’t perform miracles because He wanted to impress people. everything He did was God’s deeds. Christ was God’s man in action.

You and I are also called to do more than just talk. As a disciple of Christ you must be were the action is. Make no mistakes: it is good to talk about God and for God, but it is better more powerful and more impressive to do deeds that prove you are a God-directed person. Deeds done with compassion and kind-heartedness reflect Jesus deeds. Charity that cost you something is the way in which Christians disciples prove that they are God’s people in action. Don’t let your religion stagnate; do something and become a doer of the Word and not just an idle hearer, fooling yourself.