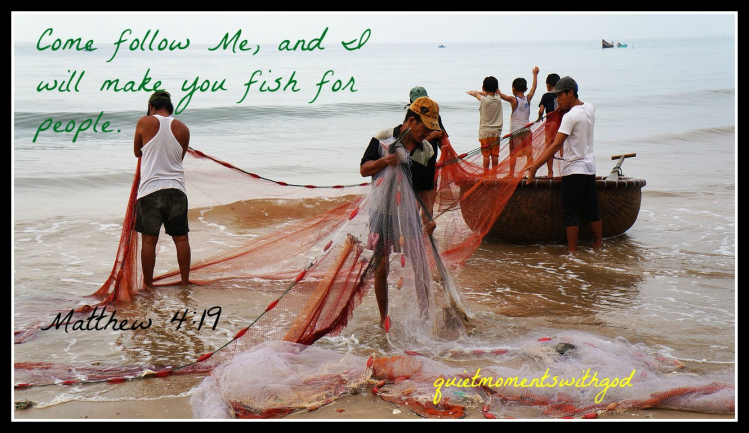 As Jesus was walking beside the Sea of Galilee, he saw two brothers, Simon called Peter and his brother Andrew. They were casting a net into the lake, for they were fisherman. “Come, follow me, “ Jesus said, “ and I will send you out to fish for people.” At once they left their nets and followed him. Going on from there, he saw two other brothers, James son of Zebedee and his brother John. They were in a boat with their father Zebedee, preparing their nets. Jesus called them, and immediately they left the boat and their father and followed him.                     Matthew 4:18-22

I wonder how many of us if Jesus was still on earth and he ask us to follow him would we drop everything at that very moment and do it? In the book of Matthew it talks about the beginning of Jesus public ministry. John the Baptist had been put to death; and Jesus had withdrawn to Galilee, not because afraid of Herod Antipas, who had put John to death, but because he had a different vision of the future. There was agitation all over Judea for a king, for someone to avenge John’s death. Jesus’ vision of the kingdom was one of nonviolence. He was not interested in revenge not even for the death of his cousin and friend but for peace.

For Matthew, this scripture was enough to justify Galilee, rather than Jerusalem, as the center of Jesus’ ministry. It is a call for a response to God’s action. God is making a new world. Get a new sense of direction and purpose and become part of that new world. Repentance is not only about remorse, but, more important, about a change of direction.

The contrast of light and darkness is a familiar theme in describing this life direction. Jesus, in fulfillment of the Scriptures, has ushered in an age in which the repentant will move toward the realm of light, and ways from darkness, the shadow of death. The light had dawned because Jesus has arrived. Jesus issued his called to discipleship, knowing the culture, heritage, and economic status of these fisherman. He asked them to leave what they knew and were comfortable with, to come and embrace a new lifestyle with different values and goals.

What is Jesus asking us to do? Jesus is issuing a similar call to modern, would-be disciples. We come from diverse cultures,. different worldviews, and different places on the socio-economic ladder. We, like the disciples of old, are also called to leave the comfort and predictability as we enter a life of service to God.

The call of fisherman to become disciples is significant, because it is the beginning of the church. Jesus took the initiative, he sought out these men in the midst of their work. The call was both a command and promise. The command was to follow him. The promise was to become “fishers of people”

Peter as well as Andrew, James and John left everything and everyone to follow Jesus. He issued a powerful appeal that made disciples. And it made a real difference in their lives. How do we become disciples of Jesus Christ? It is not a great mystery. We simply follow him, Jesus calls some us to adventure of serving in the mission field in a foreign land. Others are called to adventure close to home, serving God’s people through service organizations and schools, through food pantry, legal assistance, volunteering and voting, offering prayer and healing. There are so many ways for God’s people to follow Jesus into the adventure of serving. Where do you hear, God is calling you to join Jesus in the adventure of being his disciples? What row is yours to plant? What need in your church, or community, or in the wider world cries out to your heart? How will you respond to Jesus when he says “COME AND FOLLOW ME”