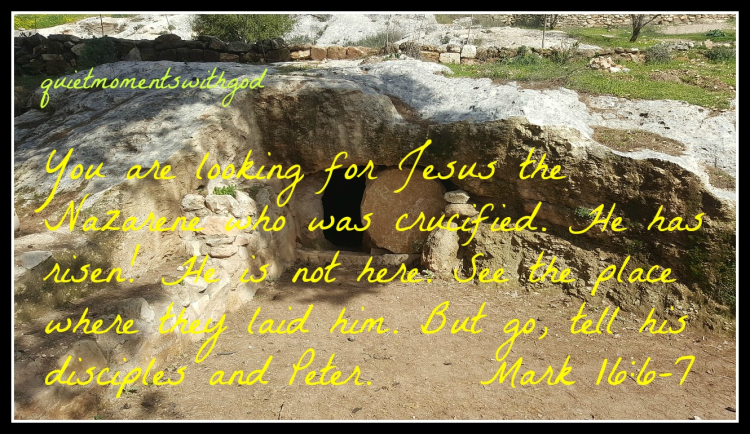 When the Sabbath was over, Mary Magdalene, Mary the mother of James, and Salome bought spices so that they might go to anoint Jesus’ body. Very early on the first day of the week, just after sunrise, they were on their way to the tomb and they asked each other, Who, will roll the stone away from the entrance of the tomb? But when they looked up, they saw that the stone, which was very large, had been rolled away. As they entered the tomb, they saw a young man dressed in a white robe sitting on the right side, and they were alarmed. “Don’t be alarmed,” he said. You are looking for Jesus the Nazarene, who was crucified. He has Risen! He is not here. See the place where they laid him. But go, and tell his disciples and Peter, He is going ahead of you into Galilee. There you will see him, just as he told you. Trembling and bewildered, the women went out and fled from the tomb. They said nothing to anyone, because they were afraid.

According to the Scriptures, our Risen Savior appeared to different individuals before ascending to the Father. It was a random coming and going, but specific encounters to teach us certain things. This took place during the period between Easter and Pentecost, between the Resurrection and Ascension. In today’s Scripture verse, Jesus gives us some “resurrection comfort.” When the men who walked to Emmaus were back in Jerusalem with the joyful news of their encounter with the risen Jesus, the other disciples replied, “The Lord has really risen!” (Luke 24:34) Paul says, “He was seen by Peter and then by the twelve” (I Corinthians 15:5-6) All these pronouncements tells us that, firstly, the Risen Lord wants to give the remorseful sinner back his self-respect. The first apostle Jesus appeared to was the one who denied Him. (Peter) Here the greatness of Christ’s love is demonstrated. He thought about the bitter grief of the Peter who wronged him, instead of wrongs and grief He himself suffered. Put yourself in this situation. Imagine with how much trepidation Peter received this message! Could it be true? Did he hear correctly? Did Jesus really mention his name? He has been the cause of so much of Jesus’ sorrow. He had denied Him three times! But this is how Jesus treats the sinner. Wo will ever be able to fathom the depth of God’s forgiving grace?

Against the dark background of Peter’s denial, the light breaks through in the disciples’ words to the men from Emmaus: The Lord has really risen! He appeared to Peter (Luke 24:34) A jewel glitters so much brighter on a dark background. Likewise, the grace of God and His saving omnipotence are best seen in a deeply fallen sinner. This short extract from history should encourage even the greatest sinner to go to the Father and confess their sins.

The gospel gives us no sensational or gripping detail of the conversation between Christ and Peter. Peter didn’t tell anyone what happened between him and Jesus. In life there are intimate and personal things that cannot bear up under the harsh glare of public exposure. There are spiritual experiences that must remain private because they are part of one’s personal fellowship with God. We dare not reveal every spiritual blessings to inquisitive publicity seekers, or shout it from the mountaintops.

Three long nights of consuming grief followed Golgotha as well as the shock of Judas’ gruesome death. The offering that God seeks is a broken heart and a downcast spirit; He will not break those who are struggling. Peter discovered what true remorse meant, being tearful, unsure of his next step, knowing he was a fallen sinner, with hands outstretched to heaven in an impassioned plea for grace. And Christ in His unfathomable love and mercy is there, a place of true repentance. He meets in quiet reclusion with the remorseful sinner.

I come to you with a humble heart asking for forgiveness of my sins that I have committed. I thank you for taking my place on the cross at Calvary. Help me to become more like you and to serve others in your name, as you did here on earth.    Amen

Blessings to All of You on this Easter Day!