A little with God is better than much without Him. As believers, we will make sacrifices in our lives. There are times, if we were honest, that we will see some people doing certain things, and we think. That looks like fun. You might even be a little tempted. You look at people who live for selfishness, partying, or multiple sexual encounters. But then let the years pass. Look at the course their lives have taken and the course your life has taken.

I know people from my life who didn’t except Christ when I did. They went their way, and I went mine. I run into them every now and then, and I think. Thank God that I went the way I did to follow Christ. So many think that I miss a lot of fun such as parties, and drinking and so on and I am so happy and bless I did not. But what God gave me in the place of these things like friends and material things and I know I am so much better and bless by it as well.

It has been said one must wait until sunset to see how splendid the day has been. I know that when you are young, many things look so tempted. Go out and party, or go to church? Go out and have fun, or sing the latest song which is not encouraging or sing songs and Praise God in the moment. The point is that you will make some sacrifices. You will deny yourselves at times. But then, you will look back on your life someday, you will come to realize that you didn’t really miss anything. 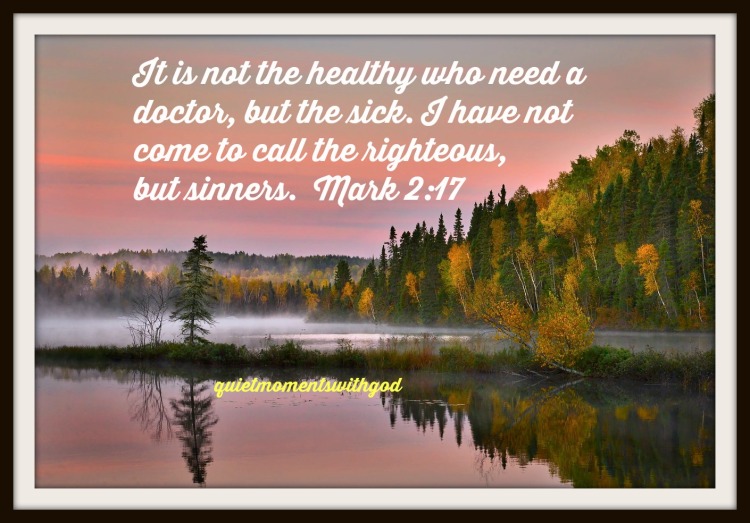 It’s worth nothing that every person Jesus had conversations or contact with was in a different situation, and He dealt with each one differently. That is because He recognized that even though we share many of the same problems and basic needs, every man, woman, and child is a unique individual with unique needs.

In his encounters with people, Jesus was like a physician. He basically said, “I want to let you know that I didn’t come to bring the righteous to repentance, but I came to bring sinners because those who are whole don’t need a physician.”

I think the hard thing about being a doctor must be seeing people, for the most part, only when they are sick! They usually don’t have their patients stop by and say, “Hey, Doc, I’m reeling good, and I just wanted to tell you that. Want to go lunch?” You don’t usually call your doctor when you’re feeling at the top of your game. You call when you are feeling sick, and your doctor will have you come in to his or her office, examine you, and apply the specific remedy to the area of need.

Jesus the Great Physician. He came to heal the brokenhearted, to preach deliverance to the captives give sight to the blind, and freedom to the oppressed. He already has determined your precise areas of need, whatever they may be, and He will minister to you as an individual. 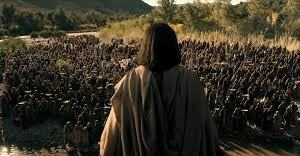 via Are You Forgiven? — God’s Maintenance Man

History tells of a courageous Christian who was standing before one of the Roman emperors who was persecuting the church. The emperor was demanding that Christians abandon their faith, deny the Lord, and declare Caesar as Lord. But this Christian refused. So the emperor threatened, “Give up Christ or I will banish you.”

The Christian said, “You can’t banish me from Christ, for He has said, “I will never leave you no forsake you.” (Hebrews 13:5)

The emperor then turned to the rest of his court and said, “What can you do with such a fanatic?”

That so called fanatic knew something about God’s protection. And that is something we all should know about in these frightening times in which we are living. there are so many things we can be afraid of, from getting on a plane to becoming a victim of violent crime to being diagnosed with a life-threatening disease.

It is great to know that God promises, “A thousand many fall at your side, and then thousand at your right hand, but it shall not come near you. (Psalm 91:7). It isn’t over until it’s over. Until that time, we can go out with boldness, knowing that God is in control of our lives.

Ascending into the heavens, high above the moon and stars, I can hear my Father, at a glance, calling out your name. The crowd forms and I mingle amongst them searching for the only one who’s ever truly loved me. An orchestra of harps and violins sway like palms on a sunset beach as night […] 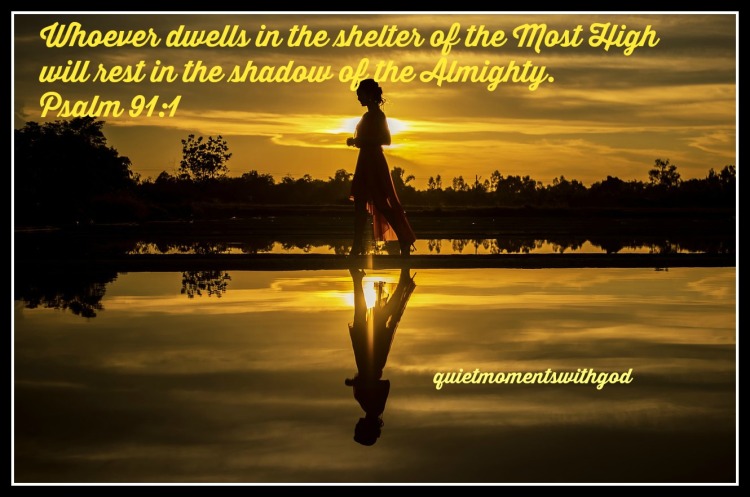 Whoever dwells in the shelter of the Most High will rest in the shadow of the Almighty. I will say of the Lord, ‘He is my refuge and my fortress, my God, in whom I trust.”    Psalm 91:1-2

When you were a child, did you ever have a hiding place, a place you would run to when you were afraid or wanted to be alone? (For me I still do) God wants to be your hiding place. The good news is that you can retreat to this hiding place wherever you are. When you are tied up into bumper-to-bumper traffic, you can retreat there. When you are having a conflict at work and don’t know what to say or how to deal with it, you can immediately retreat into that secret place of the Most High as you live in fellowship and communion with God.

It is not only dwelling there, but it is living under the shadow of the Almighty. Have you ever tried to walk in someone’s shadow? It can be done, but you have to stay really close. That is exactly the picture here in Psalm 91:1 God is saying, “I want you to be so close that you are actually in my very shadow.” If you do that, it will give you the courage to face life.

Remember the story of the great prophet Elijah, who boldly stormed into the court of wicked King Ahab and Queen Jezebel and declared that it would not rain, except at his word? Where did he get the courage to pull off something like that? Through Elijah was in the court of powerful monarchs, he recognized that at the same time, he was in the presence of even more powerful Monarch. He will dwelling in the secret place of the Most High.

If you kneel before God, you can stand before man. Are you walking in this fellowship with Christ.

As we look at how dark our culture is today, we wonder if we can ever really make a difference. It seems so overwhelming. It seems as though darkness is spreading and light is receding. It is like the time Isaiah described when he said, “What sorrow for those who say that evil is good and good is evil, that dark is light and light is dark, that bitter is sweet and sweet is bitter.” (Isaiah 5:20)

To illustrate that very point, I could cite Christian songs that are popular right now. We celebrate that which the Bible says its wrong and offensive to God, and we laugh at that which the bible holds forth as standards we should live by. The good news is that the same Holy Spirit who set the early church in motion can use us if we are willing.

It’s interesting to note that in the first century, the question on the disciples minds was, “Is the end of the world near?” That same question is on the minds of many today. What Jesus essentially said to his disciples, “This isn’t the time for that. My purpose is to rule and reign in the hearts of people. Don’t be concerned about when I am going to do that. Rather, be concerned about what you should be doing while you wait.”

The same principal holds true for us. Don’t worry about when, Christ will return when the time is right. What we should be committing ourselves to, what we should be interested in, is what we are supposed to be doing as we await the Lord’s return. 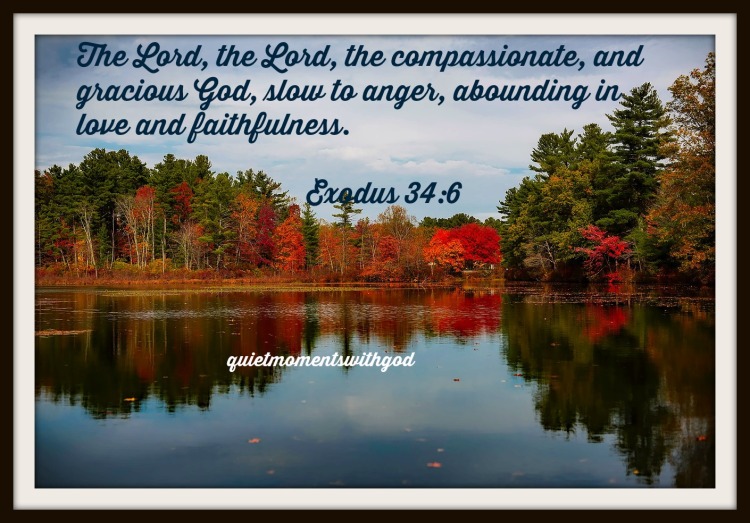 The Lord passed before Moses proclaiming, “The Lord, the Lord God, the compassionate and gracious God, slow to anger, abounding in love and faithfulness.   Exodus 34:6

An unforgiving Christian is a contradiction in terms, an oxymoron. To say you are a follower of Jesus Christ, and yet harbor unforgiveness in your heart is simply wrong.

Jesus touched on the issue of forgiveness, in Matthew 18:21-22 Then, Peter came to Jesus and asked, “Lord, how many times shall I forgive my brother or sister who sins against me? Up to seven times?” Jesus answered, I tell you, not seven times, but seventy-seven times.” It was a theme of so many times of Jesus’ parables, it was part of His prayers, and He hammered on this issue again and again in the private talks he had with His disciples.

You are never more like God, then when you forgive. Alexander Pope wrote, “To err is human, to forgive is divine.” We reflect the nature of God in such a dramatic way when we are willing to forgive. If you really want to be like the Lord, then you need to be a forgiving person because he is a forgiving God.

Exodus 34 gives us this description of God, “The Lord, the Lord God is merciful and gracious, the compassionate and gracious God. Jesus taught was to pray and in the Lord’s prayer it states “Forgive our debts as we forgive our debtors, Matthew 6:12. Your kingdom come, your will be done on earth as it is heaven. What is going on in heaven? The worship of God, the exaltation of Christ, and the granting of forgiveness. Therefore, we should be worshiping God. We should be exalting Jesus Christ. And we should be forgiving one another.