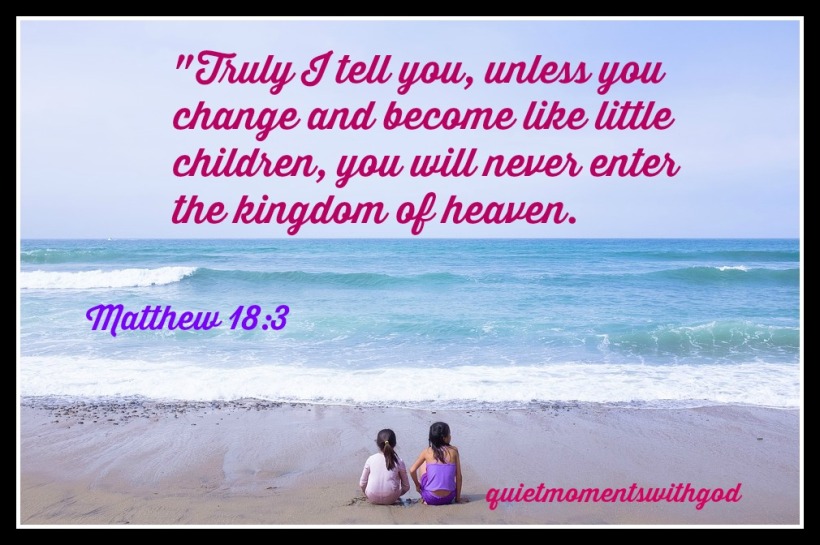 A little child cannot influence a person’s career, cannot teach us things; give us things. It is just the other way round. A child is typical of the person who needs things, and it is our duty to find and help those in the community who need things. But this comes with a serious warning. It is easy to form a relationship with someone who can do things for us and whose influence can mean a lot to us. It is just as easy to avoid the company of someone who expects something from us. It is easy to nurture the kindness of important people and avoid the simple, humble person. It is easy to seek the company of people who are important in the community while neglecting your unimportant family member.

Prayer: Beloved Savior, keep me humble in my relations with other people. If you live in a community that is saturated with the Christian faith it’s not easy to imagine a condition where there is a marked difference between the regular community and Christianity. But it does happen in many places.

The Christian community was a small minority where John recalled Jesus’ prophetic words in this Scripture verse. there was a marked difference between the small minority of Christians and the world that loathed them.

William Temple wrote in Readings in John’s Gospel: Are we not of this world? It is not so that our origin or character is in agreement?” Yes, only too often. But this is not the distinguishing and functional factor that makes us different when we become Christ’s followers. “You are no longer part of the world, I chose you to come out of the world, so it hates you. The phrase “the world” is repeated, but with a difference. Linked to the verb “chose”, it no longer represents origin and growth, but a place of separation, and consequently segregation. This is in part where the hate of the world felt. The world dislikes Christians. It begrudges them their new character, it is tortured by the new character and furious about their joy in Christ. Can the world notice that the difference in your life because you are a Christian? not always. Jesus’ disciples as well as other followers ask Jesus to teach them to pray. The Lord’s Prayer:   “Our Father in heaven”  The word “father” conjures up different feelings for different people: a loving advisor, treasured friend, faithful provider–to name but a few. Then there are those who might say, “If He’s anything like my father, I hate Him” Others say that God is the kind of Father they would have wanted. With disciples, who lived in a patriarchal community, the entire family’s life revolved around the father. He provided for the family, protected them and maintained discipline. Jesus illustrated this kind of father in the parable of the Prodigal Son.  He didn’t stop loving his willful son and he didn’t punish him when he returned.

Can God’s character be revealed in a word like “father”? There are more than two hundred names of God, yet Jesus chose “Father” because it is the easiest for people to understand. God becomes “Abba”-the affectionate name Hebrew children used to address their father. We, as sinners, may call the Holy God, the Consuming Fire, Father. Those who have no hope left, who have no prospects of a heavenly home, may call Him Father.

What does this say to us? It says that God loves us with an unfathomable love that gave His Son to suffer and die for our sins. The person who understands this is like the little boy standing on the street corner shouting down the street, “The Father is coming! The Father is coming!” He does this not so that the other children must run like terrified chickens, but that they leave everything: sand castles, mud pies and tricycles, and run towards Him, who stands with open opens.

“Our Father” a loving and compassionate Father, as a good-natured father ought to be. But this Father in heaven is also God. That is His name” a glorious, heavenly, holy name. His name is different and cannot be compared to any other name. His name encompasses all: All knowing, All-seeing, All-mighty. When Moses asked Him at the burning bush who He was, He answered, “I am who I Am”        Exodus 3:14

His name is clearly written across creation: on every dewdrop, every cloud, on every majestic mountain and in every green valley. His name is evident in the order of the universe, but especi8ally in His covenant, in Christ and in the Holy Spirit. We find the very being of the only true God in Christ. “Anyone who has seen Me has seen the Father!” (John 14:9) Other than the evil that loves anonymity and wants to strip us of our identity, God has a name and He has made it known to us: The Holy One, the Almighty, the Eternal.

And what do we, insignificant humans, do with God’s name? This name is flung across the globe: in books, by word of mouth, in the media, in films, on walls and obscure places. In the process God’s name is violent by someone each and everyday. We have abuse His name and make it hollow, insignificant and meaningless. We don’t think about what we say or whose name we misuse. “The Lord sits in majesty in Jerusalem, exalted above all the nations. Let them praise Your great and awesome name, Your name is Holy! (Psalm 99:2-3) and so worthy to be Praise now and forever. 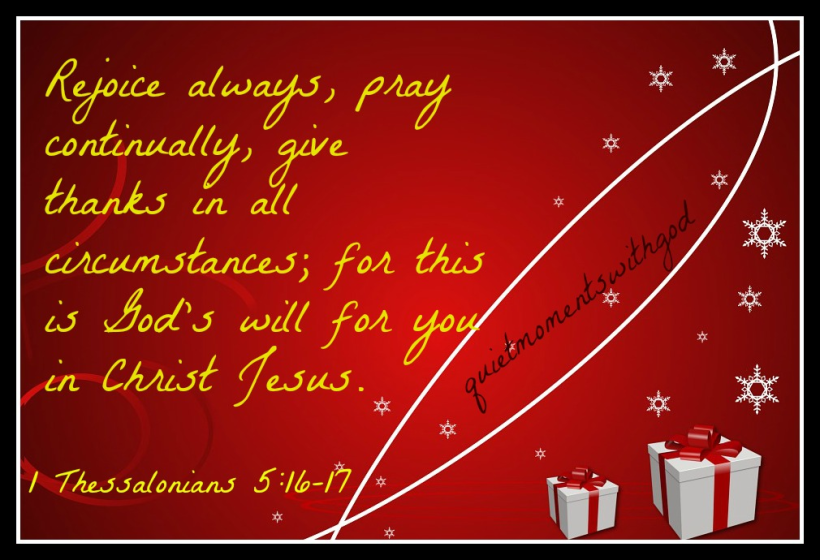 Rejoice always, pray without ceasing,
give thanks in all circumstances;
for this is the will of God in Christ Jesus for you.
Do not quench the Spirit.
Do not despise the words of prophets,
but test everything.
Hold fast to what is good; abstain from every form of evil.
May the God of peace himself sanctify you entirely;
and may your spirit and soul and body be kept sound and blameless
at the coming of our Lord Jesus Christ.
The one who calls you is faithful, and he will do this.
(1 Thessalonians 5:16-24, NRSV)My friends, nobody said the journey was going to be easy. Maybe it is for the best that Advent always starts off with a hard dose of reality. But as we enter into the homestretch of the season and begin final preparations not only to celebrate the birth of Christ into the world and his coming again in final glory, but also to welcome friends and family members who are coming down home, some of whom might not be gathering with good intentions, let us not quench the Spirit. Let it be in a spirit of grace that we acknowledge that for many of us, welcoming guests or going home will never resemble in any way the pictures of perfect familial bliss that we see in the constant holiday barrage of Photo shopped advertisements, holiday television specials, and Christmas movies. Nevertheless, let us enter into this time with rejoicing, prayer, and giving thanks, for this is the will of God in Christ Jesus for us. For no matter how hard the journey may be some days, we know that joy is our true home, and our true home is with our Savior Jesus Christ. There is a centurion servant, whom his master valued highly, was sick and about to die. The centurion heard of Jesus and sent some elders of the Jews to him, asking him to come and heal his servant. This man deserves to have you do this, because he loves our nation and has built our synagogue. So Jesus went with them. He was far from the house when the centurion sent his friends to say to him. “Lord, don’t trouble yourself, for I do not deserve to have you come under my roof. That is why I did not even consider myself worthy to come to you. But say the word, and my servant will be healed. For I myself am a man under authority, with soldiers under me. I tell this one, “Come”, and he comes. I say to my servant, “Do this,” and he does it.” When Jesus heard this, he was amazed at him, and turning to the crowd following him, he said, ” I tell you, I have not found such great faith even in Israel.” Then the men who had been sent returned to the house and found the servant well.

What is faith a little child ask me during Sunday School one day. Well, I said, faith means we believe in God even thro we cannot see him or even touch him. We are all created in the image of God and therefore we know God does exists. If we take the time to google the definition of faith you will find that it tells us that faith is a complete trust in something or someone. It is believing something that you know in your mind it is not true, however your heart tells you it is. However, from a Christian point of view we can look up what faith is in the book of Hebrews 11:6. Now faith is confidence in what we hope for and assurance what we do not see. Also in Hebrews 11:6 without faith it is impossible to please God, because anyone who comes to him must believe he exists and he rewards those who earnestly seek him.

In the book of Luke we can read the amazing faith of a Roman solider. This centurion had a faithful servant who becomes sick and is near death. Somehow this centurion learns about Jesus and how he has healed others. With this knowledge he sent others to look for Jesus and to see if he would be willing to heal his servant. Jesus was willing to go to this centurion’s home to heal his servant, however he didn’t feel that he was worthy for Jesus to enter his home.  All Jesus had to do was to say the words and his servant would be heal, he had such great faith, knowing what Jesus was able to do. Throughout the scriptures we see men and women with amazing faith, and I will share with all of you over time. If you are sitting at your desk reading these words and ask yourself how do you come to have faith, my answer to you is this, by having a daily walk with our Savior Jesus Christ. We need to earnestly seek him. God doesn’t expect perfection in our search for him. He does rejoice when we seek him day after day, because nothing pleases him more than our longing for him to be a part of our daily lives.  How do we do this, first off by being a part of a Christian community such as a church family, fellowship with one another is important to our growth. Bible study, another way to understand the scriptures is during a bible study. Another important is having a prayer life with our Lord daily. We need time alone with God to ask for guidance for our own lives, and to have a closer walk with him, as well as praying for one another. As you begin to think of the scripture that I share with you today as well as a short message, reach out to God in prayer today to help you to have faith, faith as tiny as a mustard seed, and he will.

Grace and Peace to you my fiends