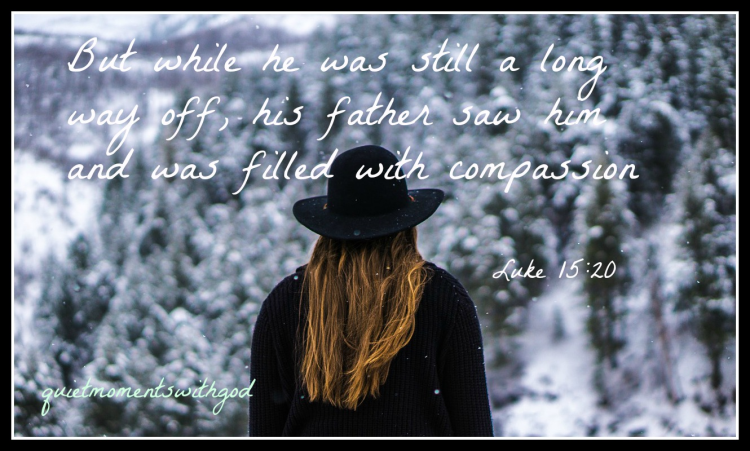 In the Gospel of Luke Jesus talks to his disciples about the Parable of the Lost Son: read these words of Jesus: There was a man who had two sons. The younger one said to his father, Father give me my share of the estate. So he divided his property between them. Not long after that, the younger son got together all he had, set off for a distant country and there squandered his wealth in wild living. After he had spent everything, there was a severe famine in that whole country, and he began to be in need. So he went and hired himself out to a citizen of that country, who sent him to his fields to feed pigs. He longed to fill his stomach with the pods that the pigs were eating, but no one gave him anything. When he came to his senses, he said, How many of my father’s hired servants have food to spare, and here I am starving to death. I will set out and go back to my father and say to him. Father, I have sinned against heaven and against you. I am no longer worthy to be called your son; make me like one of your hired servants. So he got up and went to his father. But while he was still a long way off, his father saw him and was filled with compassion for him, he ran to his son, threw his arms around him and kissed him.

We might as well say it again, that it is never easy to get up and tackle the journey back to the Father’s house. People will make it difficult for you. Like the Prodigal Son, church-goers and others will make you feel unwelcome. there will be those who will remind you of your sinfulness. Even a preacher may say hurtful things at times. But one thing is certain: you don’t ever have to doubt the Father’s warm welcome. So carry on walking and head straight home back to God.

And so we see the lost son coming over the last hill, heart pounding. Only one refrain repeats itself: I’m going home! Then he reaches the last rise, and there he see the father’s house in all its glory. He is crying unashamedly now. And then, is it possible? he sees his father, and his is coming to meet him! Do you know that the last rise in the road? Golgotha! That’s what they call that hill. “The Father is coming to meet me,” you say. “But I see a cross standing there. “For God so loved the world that He gave His only Son, so that every one who believes in Him will not perish but have eternal life.” (John 3:16)

“And while he was still a long way off, his father saw him coming. Filled with love and compassion, he ran to his son, embraced him and kissed him.” (Luke 15:20) Come, let us kneel before the Father in amazement. Let us thank God for the wonder of being able to go home. For there is nothing my friend that can ever separate you from the love of God through Jesus Christ the son, so hold you head high ever through we are sinners you and I are sons and daughter of the Most High King Jesus Christ, welcome home!

Thank you for always welcoming us home to you with such love and compassion and with open arms. In spite of the many sins we have done you never stop loving your children.